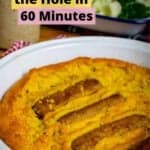 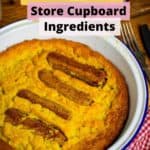 Perhaps the weirdest sounding British dish, but a much loved one and, as it turns out, very easy to veganise! Here’s our delicious vegan toad in the hole recipe…

There’s something extremely comforting about sausages cooked with batter and swimming in gravy. It’s a feel-good meal that is perfect for those wintery nights in or just getting cosy at home.

How to make vegan toad in the hole

Toad in the hole is a little more forgiving than our vegan Yorkshire puddings. Cooking the batter in such a large dish, it’s not going to be able to achieve the same rise at the edges or a pronounced dip in the middle. Getting the ratios of your batter mix right is still important though. We made a video tutorial to help:

The batter is similar to a pancake batter and consists of:

Is toad in the hole vegan?

Not traditionally! You’ll typically find eggs and meat-based sausages included, plus some recipes will include milk.

Making a vegan toad in the hole isn’t difficult though, as you’ll find out when you give this recipe a try! Start by replacing the sausages with your favourite plant-based sausages. If they're frozen, make sure to defrost or par-cook them first.

For the batter, it’s as simple as using water instead of milk. Then you can replace the eggs, typically used in a batter like this, with aquafaba. If you’re interested to learn more about how this miracle ingredient works, you can read in detail about aquafaba in our vegan Yorkshire pudding recipe.

Of course, our vegan toad in the hole recipe is completely meat and dairy free. You can very easily make it gluten free by only using chickpea flour too.

What is toad in the hole?!

There’s the big question because, let’s face it, “toad in the hole” doesn’t sound particularly appetising! But we promise you, our vegan toad in the hole recipe will leave you satisfied.

This isn’t a very well known dish outside of Britain. I’ve also met a good handful of British people who hadn’t heard of it, so I thought I’d provide a bit of context to the weirdly named dish.

Onion gravy is the traditional choice, but we’re not precious about that and think it’s equally delicious with some quick and easy Bisto.

We tend to think of it a bit like a quick roast dinner! Whip up a batter, cook it with the sausages, simmer up some vegetables and it’s done.

Originally, cheap meats like sausages, or even leftover cuts of meat were used. It was a cheap and filling meal for workers.

Nobody has been able to establish the origins of the name of the dish. One of the most popular ideas is that it relates to the way that toads hunt their prey, burying themselves in burrows, with just their heads visible.

Either way, there’s no evidence to suggest that this dish was ever made using toads!

What’s the best vegan sausage to use?

Something that’s more like a traditional British banger or Lincolnshire style sausage, in my opinion, are the best to use. But really, use whatever kind of sausage you enjoy – you can get creative and try different flavours and styles out!

The plant-based sausages we love in the UK are:

We tried Beyond sausages recently and they were below average at best. They're so expensive that we didn't try them for a long time and I wouldn’t buy them again if they were half the price. Sorry Beyond! I still like your burgers though.

A bizarrely named but delicious British classic! Plant-based sausages cooked in Yorkshire pudding batter is a real comforting treat. Perfect served with a healthy side of vegetables and a good glug of gravy.