Home » Recipes » 30 Minutes and Under 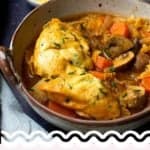 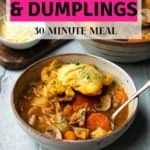 Nothing quite hits the spot on a cold winter's night like this classic vegan stew and dumplings, which are so soft and fluffy. Hearty and comforting, it only needs one pan and it’s ready in 30 minutes. Plus, if you love stews, you may like a Vegan Beef Stew too.

Check out the recipe card at the bottom of this article for exact measurements.

These steps are an overview to go with the photos of each stage. Head to the recipe card below for full ingredient measurements, instructions and recipe notes.

1. Start with the dumplings. Sieve the flour into a large bowl. Add the rest of the ingredients and mix together. Set aside.

2. Fry off the onion in a splash of vegetable oil until it starts to go slightly translucent. Add garlic to the pan and sauté for around 30 seconds. Be careful not to let it burn.

3. Add the potatoes and mushrooms. Cook for around 5 minutes until the mushrooms start to release water.

4. Pop in the tomato paste and carrots. Give the whole lot a good stir.

5. Next, add in the fresh thyme. There's no need to remove the thyme leaves from the sticks – you can simply remove the whole thing before serving. Most of the leaves will fall off anyway.

6. Pour in the ale and stock, bring up to a simmer. Add the cabbage, and then put the lid on and simmer for five minutes. Remove the lid, and stir in the cornflour mixture.

7. Now it’s time to add the dumplings! Make sure the sauce isn’t bubbling too much, as this will make it harder to add the batter. For each dumpling, take roughly 2 tbsp of the dumpling mixture and spoon it onto the stew. It should float on the top. You’re looking to create 8 dumplings, 7 around the edge and one in the middle. If you find you have mixture left after creating 8 dumplings then scrape it onto each of the dumplings evenly (there shouldn't be much mixture leftover).

8. Pop the lid back on and simmer for 10 minutes to allow the dumplings to cook. Remove the whole sprigs of thyme, serve and enjoy! This stew is especially delicious with hunks of buttered bread for dipping.

What vegetables go in stew?

Any combinations of vegetables go in stew! Often, you can use up whatever you have leftover but we like to use mushrooms, potatoes, carrots and cabbage. This is a classic selection but use what you have! Even vegetables like sweet potatoes, butternut squash, parsnips and peas go well.

How to thicken vegan stew?

The best way to thicken stew is with cornflour. It can either be sprinkled onto the onions during the frying stage, or mixed with a little water to create a thick liquid and poured into the stew midway through, like in this recipe.

Yes, you can make the vegan vegetable stew ahead of time. We’d recommend making the dumplings on the day that you want to eat them, though. Just stop after adding the cornflour mix, and then when you’re ready to serve the stew, reheat and finish by making the dumplings.

What ale should I use?

We usually go for a golden ale, but any ale is fine provided that it’s vegan and not flavoured (like the elderflower or coffee flavoured ales that you can sometimes get). You could even try using a stout like Guiness, although we think that Guiness gives a slightly sour flavour that we don’t really like as much. 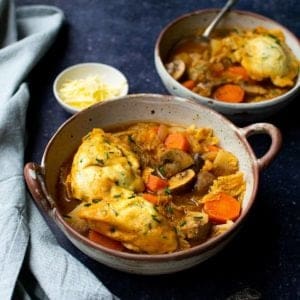