We don't make a lot of desserts - you can probably tell from the lack of them on our blog, we'll sort that, we promise - but we recently got our hands on some vegan fudge and we knew we had to use it in some baking!

So, what better than to use it to make some vegan fudge brownies? We knew they needed to be chocolatey, gooey, fudgey and a little bit salty.

We used the new vegan fudge from Johnson's Toffee & Fudge and we couldn't recommend it enough!

Anyway, this is what we came up with! We hope you like these vegan fudge brownies.

Check out this blog post if you're looking for even more vegan dessert inspiration. 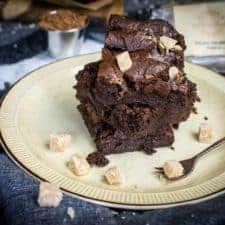 If you don't have any vegan fudge, omit. These brownies are still delicious without the fudge.