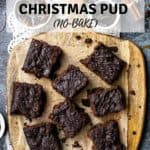 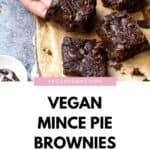 These gooey vegan Christmas brownies are the best fusion Christmas treat ever! And if you’re ever asked whether to have another brownie or another mince pie, well now you can have both.

There are a few items that will really help when making these vegan Christmas brownies. A brownie tray, which gives you the perfect sized brownie every time, a proper mixing bowl as well as cup and spoon measures, which are essential for baking. If the quantities are not measured out properly, there won’t be much chance of the brownies coming out well.

To make these gooey and indulgent vegan Christmas brownies you will only need 10 ingredients:

Check out the recipe card at the end of this article for full measures and instructions.

You can knock up these vegan Christmas brownies in around half an hour, plus another half an hour to let them cool and set. These instructions are an overview of the recipe to go with the process shots. Head to the bottom of the page for the full ingredients list, instructions and recipe notes.

1. First, take your ground flaxseed and combine it with water. Set it aside. It should take on a gel-like consistency, which is what makes flaxseed effective as an egg replacer. Preheat your oven to gas mark 5/190°C and line an 8” baking tray with parchment paper. This will ensure that your brownies cook evenly, and prevent them from sticking to the tray.

2. Chop two-thirds of the chocolate into small pieces. Melt the chocolate in the microwave, ensuring that you only put it in for short bursts at a time, to avoid burning it.

3. Stir the butter through the chocolate until it melts.

4. Next, add the sugar and stir into the chocolate and butter mix.

5. Sift the flour, cocoa powder, baking powder and salt into a bowl.

6. Next pour the chocolate mix on top, and combine.

7. Fold in the mincemeat, vanilla, and flax egg and keep folding until it’s combined.

8. Pour the mixture into your baking tray, and be careful to keep it flat so the mixture stays evenly spread. Bake for 15-20 minutes.

9. Remove from the oven and leave to cool for around 30 minutes. This will ensure that your brownies set properly, while still remaining lovely and gooey on the inside. Melt the remaining chocolate and drizzle it over the top of the brownies.

10. Serve them up with a lovely dollop of vegan ice cream, some vegan custard (we love the oatly one) or just eat them on their own. You can see full measurements and instructions on the recipe card at the end of this article.

Can these brownies be frozen?

Yes absolutely! Vegan Christmas Brownies freeze well and keep in the freezer for up to three months. Just be sure to thaw them thoroughly before eating.

Is the setting time important?

Yes. When these vegan Christmas brownies first come out of the oven they will still be extremely gooey and impossible to eat! The cooling time allows them to set and take on a firmer texture, while remaining gooey in the middle.

Can I make them ahead of time?

You can. They’ll keep in an airtight container for around 10 days in a cool spot. Don’t keep them in the fridge as they will dry out.

Mincemeat got its name because in the early middle ages (when mince pies were first served) that’s exactly what it was. Back then the pies would be filled with a mixture of minced meat, chopped up fruit and a liquid to preserve it.

Thankfully the meat was later removed and ‘mincemeat’ became the mixture of dried fruits and spices that we’re used to today.

Traditionally mincemeat is made with animal-derived suet, but a lot of the mincemeat you would buy in supermarkets now is marked vegan. We know that, in the UK, Tesco definitely does a vegan mincemeat for under £1, because we buy it every year.

If you want to fill your home with the scent of Christmas, you can even make the vegan mincemeat for these vegan Christmas brownies yourself. 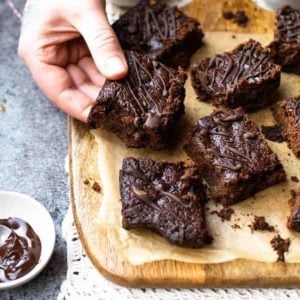 These Mince Pie Christmas brownies are a fantastic holiday treat. Perfect for the run up to Christmas or even on the big day itself. Just make sure to let them stand before tucking in!
5 from 1 vote
Print Pin Rate
Course: Dessert
Cuisine: British
Prep Time: 15 minutes
Cook Time: 20 minutes
Resting: 30 minutes
Servings: 12 Slices
Calories: 284kcal
Author: Jess & Dan