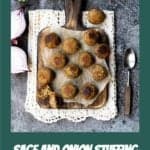 This four ingredient sage and onion stuffing recipe can be in your belly within thirty minutes! We’re going to be serving up our Christmas dinner with lots of it on the side, but it works really well as part of any roast dinner. This recipe is made extra delicious by the addition of red onion.

Traditionally, stuffing is made from the giblets of poultry (yuk) so it wasn’t vegan in the slightest! Thankfully, we’ve moved on a bit since then and this sage and onion stuffing recipe is totally vegan.

Homemade stuffing is loads tastier though, and it’s so easy to make, you aren’t gaining an awful lot by using a packet.

You’ll also want a generous helping of salt and pepper to season.

How to make sage and onion stuffing

This vegan sage and onion stuffing is super easy to make! First preheat your oven, and while it’s warming get all of your ingredients ready.

Careful not to toast the breadcrumbs!

Then all that’s left to do is attempt not to eat them all before plating up… this is probably the greatest challenge about the recipe to be honest!

For detailed measurements and timings please see the recipe card at the end of the article.

This sage and onion stuffing recipe is...

...one of our favourite creations because it’s so easy to make! In less than thirty minutes we have a delicious addition to any roast dinner, whether it’s a quick pick me up during the week or a Sunday roast with all the trimmings.

We especially enjoy how fragrant it is. It makes our kitchen smell so good that our tummies immediately start rumbling in anticipation. Is there anything better than being really hungry when you know there’s a good meal on the way?

How to make sage and onion stuffing - top tips!

This recipe is super simple which is why we like it so much. That being said, even the easiest recipe can still go wrong!

To make sure you end up with perfectly light and delicious sage and onion stuffing balls, there are a few top tips you should follow:

What to serve with sage and onion stuffing

These vegan sage and onion stuffing balls are the perfect addition to a roast dinner with all the trimmings! Try serving them up with:

Our mushroom wellington is the perfect centrepiece to any roast dinner, whether it’s Christmas day or just a normal Sunday. Like the stuffing balls it can be made and frozen in advance, and is super quick to make, so you can have more time to relax if you don’t like to spend your whole Sunday cooking.

Lots of our favourite bits of a roast dinner are really quite savoury, which is why we love adding these sweet maple glazed carrots and parsnips into the mix. They add a nice sweet and yet fresh flavour to your plate, and they’re lovely and crunchy.

We have to admit, we felt pretty smug when we figured out how to veganise cauliflower cheese! It’s the part of a roast dinner that we’d really missed since going vegan, and now we can have it whenever we want.

Not sure you can even call it a roast dinner if you haven’t got a good helping of roast potatoes! These are great because they manage to be both crispy on the outside, while remaining fluffy on the inside. Treat yourself, ‘tis the season to be carby.

Can this dish be made in advance?

Yes it most definitely can! You can get them to the ‘ball’ stage and then heat them when you’re ready. This can be really helpful for timing when you’re cooking loads of different things at once, like on Christmas Day.

Do these sage and onion stuffing balls freeze?

Indeed they do! Just pop them in the freezer once they’re cooked, and they’ll be ready for you to reheat whenever you like. They actually reheat really well.

Can this vegan stuffing recipe also be gluten free? 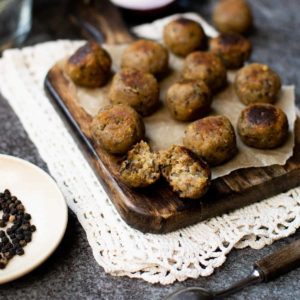