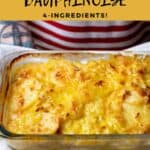 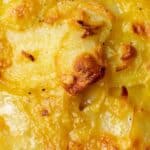 Vegan Dauphinoise potatoes are a decadent cheesy side dish that feel like a real treat. Layers of sliced potato, a golden crispy top and a soft indulgent centre. It will really hit the spot. A great addition to a vegan roast dinner, and it only needs 4 ingredients too!

4 ingredients – this recipe is incredibly rich, creamy and delicious, yet it only needs 4 ingredients. Baking the potatoes with the garlic, dairy free cream and dairy free cheese really brings out the flavours of everything. It makes the most indulgent cheesy vegan dauphinoise potatoes.

Big flavour – as mentioned above, just because there are only a few ingredients in this vegan dauphinoise recipe, that doesn't mean it lacks any flavour. Everything used packs in a punch. It's actually a fantastic complementary dish on the side of a roast dinner with air fryer broccolini, yorkshire puddings and even a cashew nut roast.

Vegan version – Potato au gratin, or dauphinoise potatoes, is a classic side dish from the Dauphiné region of France (same dish, different name). It's a popular side dish that's basically made up of sliced potato cooked in fresh garlic, creamy sauce and cheese.

Thanks to the huge rise in veganism worldwide, and certainly here in the UK, it's very easy to buy dairy free versions of cream and cheese.

That means there's no messing around with making your own cashew cream as an alternative (though if you want to, you certainly can). And it means it's super easy to make creamy vegan dishes, just like this creamy vegan cauliflower cheese.

Thinly sliced – this recipe works so well because the potatoes are thinly sliced. That can be achieved with a knife, food processor or mandoline. It also ensures that the potatoes cook evenly and at the same rate!

🥔 What are dauphinoise potatoes?

Potato dauphinoise is a traditional side dish made from sliced potatoes, cream, fresh garlic cloves and cheese. It's rich and indulgent. Hailing from the Dauphiné region of France, it's also the same as potato au gratin, and is also known as a classic gratin au dauphinois.

Potatoes – an essential ingredient for vegan dauphinoise potatoes! We recommend using a starchy potato like a Maris Piper, King Edward or Russet. Different recipes call for different potatoes, but we much prefer starchy over waxy potatoes for this one. More on that later.

Vegan cream – we're blessed with a big selection of vegan creams here in the UK. Oat, soy and coconut cream can all be found in single and double varieties in standard supermarkets.

We find that the double creams on offer aren't that much thicker than the singles, but do have an additional creaminess, so that's what this recipe should use. A single cream works well too, but will be slightly less creamy and a little runnier.

Vegan cheese – any shop bought plain vegan cheese will work. If you can find a dairy free gruyere cheese, that's great. However, it's not something we've come across before. Just make sure it can be grated, or you could even buy a grated vegan cheese and then there's one less step of prep! It's key for a really indulgent, cheesy finish!

Fresh garlic cloves – French food is infamously garlicky, so there's a healthy 4 cloves in this recipe. We love a good helping of garlic, but you can scale it down (or up) to your taste.

Optional extras – some vegan dauphinoise recipes call for using fresh thyme and grated nutmeg. They can be added if you'd like. Try a ¼ of a teaspoon of grated nutmeg, and 1 tablespoon of chopped fresh thyme to the sauce. You could also mix it up with other fresh herbs, but we'll leave that up to you.

Check out the recipe card at the bottom of this article for exact measurements to make this vegan dauphinoise potatoes recipe.

This is a step-by-step overview with photos for making easy vegan dauphinoise potatoes. The full recipe, along with measurements and detailed instructions can be found in the recipe card at the bottom of the page.

2. Add a tablespoon of vegan butter, margarine or olive oil to a saucepan over a medium heat and gently fry the garlic for a minute.

4. Season with salt and pepper then bring to a simmer. Then take off the heat and set aside the dairy free sauce for later.

5. Put a layer of potato slices in a 26cm x 16cm baking dish, then add a sprinkle of cheese. Repeat each layer until all of the potatoes and cheese have been used.

6. Once all of the layers are in, pour the sauce over the potatoes. It should perfectly slip down between the gaps of the potatoes and then beautifully cover everything. If it doesn’t quite cover you can always add a splash of dairy free milk.

7. Cover with foil and bake in the oven for 40 minutes.

8. Remove the foil then put the baking dish back in the oven for another 15-20 minutes to bake, until the top of the dauphinoise potatoes is golden brown.

Pick the right potato – As we mentioned earlier, it's best to use a starchy potato for this vegan potato gratin. King Edward, Maris Piper and Russet all work well.  That's because waxy potatoes slide around a lot when cutting into the finished dish (both serving and once it's served on plate). In contrast, the starchy potatoes maintain a better structure at the end, albeit the slices are a bit softer than the waxy kind.

Use a slicing tool – it's best to use a mandoline or a slicing blade in the food processor to get thinly sliced potatoes. It will will be considerably faster and easier to make the vegan dauphinoise potatoes with the right tools.

However, it's not completely essential. Alternatively, just grab a very sharp knife and cut each potato into even 3mm slices. Take your time and have a little patience when cutting the potatoes as it might take you a while.

Make it ahead of time – this is one of those delicious side dishes that can be kept in the fridge for a few days, or even frozen for a few months, then simply covered and reheated in the oven when you need it. So if you're cooking up a big vegan Christmas, Thanksgiving or other holiday meal, this should take some of the pressure off on the day.

How do you make vegan dauphinoise potatoes?

It's as simple as switching out the non-vegan ingredients for vegan ones! Grab an oat, soy or coconut-based cream, your favourite plant based cheese and you're good to go (as long as you have potatoes and garlic, that is!). Check out the recipe card for the full ingredients and cooking steps.

Are dauphinoise potatoes the same as scalloped potatoes?

No, although they're pretty similar. Scalloped potatoes use a roux of butter, flour and milk. Dauphinoise potatoes call for cream and cheese so it's a much richer, more indulgent dish. However, it is the same dish as potato gratin. 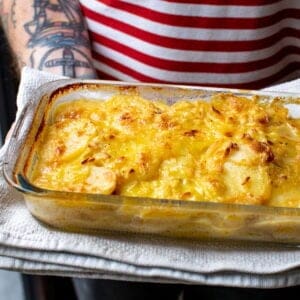 If you can’t get dairy free cream, you could make your own cashew cream. Make ahead by stopping at step 6, and then baking a couple of days later. Once cooked, it keeps in the freezer for 3 months and in the fridge for 3 days. Make it gluten free by using a gluten free dairy free cream. Everything else is gluten free as standard in this recipe.