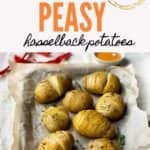 The great thing about vegan hasselback potatoes is that they are basically two types of potato in one! They combine the delicious fluffy texture of jacket potatoes on the inside, with the crispiness of thinly sliced sauteed potatoes on the outside.

Smothered in tasty, herby, vegan butter you’ll have a real crowd pleaser on your hands.

🥔 What are hasselback potatoes?

Hasselback potatoes are a type of baked potato. The potato is cut halfway through into thin slices before it is baked. Because the slices on top are thin they go lovely and crispy, while the bottom part of the potato retains the fluffiness that is characteristic of a jacket potato.

They got their name from the Swedish restaurant where they were first served in 1953.

Traditionally they are made with lots of butter, but we’ve made these vegan hasselback potatoes by using a dairy free alternative.

👩‍🍳 How to cut hasselback potatoes

How you cut the potato is the key to giving these vegan hasselback potatoes the texture that you want. Each slice should be about ⅛” wide, and they should stop around ¼ of the way from the bottom of the potato.

This is actually quite hard to do… unless you use our top secret pro tip. Are you ready? Position your potato between two chopsticks or a couple of wooden spoons while you’re cutting them. That way, you can’t accidentally cut too far down and slice bits of potato off because the spoons or chopsticks will stop you.

You only need three ingredients to make our super delicious vegan hasselback potatoes. You will need:

For detailed measurements please see the recipe card at the bottom of this article.

Following this easy hasselback potatoes recipe will mean that you have your potatoes ready in around half an hour. And most of that time is the time the potatoes spend in the oven!

And there you have it, herby vegan hasselback potatoes! For more detailed measurements and instructions, be sure to check out the recipe card at the end of this article.

🥕 What to serve with hasselback potatoes

These vegan hasselback potatoes are great as party food, or as easy food for an epic night of gaming. They are really something special when they are part of a roast dinner. You might like to try them alongside:

We love this cashew nut roast so much that we had it for Christmas dinner! It’s much more exciting than any nut roast you’ve had in the past because it has a yummy, gooey, cheese layer in the middle. This, combined with the creaminess of the cashews makes it super satisfying.

Tasty veg is what makes a roast dinner really special in our opinion. These maple roasted carrots and parsnips add a lovely crunchy sweetness to your plate that really can’t be beaten.

Before we went vegan, cauliflower cheese was something that we really looked forward to as part of a roast dinner. So after we ditched dairy, we had to make it our mission to create the perfect vegan cauliflower cheese. After trying countless different vegan milks and cheeses, we’ve finally landed on a combination so winning that even non vegans love it.

In addition, these potatoes will go really well served with a Vegan Sausage Casserole.

If you’d like some more inspiration for your vegan roast dinner, check out our Ultimate Guide to making a Vegan Roast Dinner. We’ve included 34 top recipes in that article, and even share our go-to roast dinner recipes!

If you’re looking for Christmas vegan recipes, then check out our vegan Christmas dinner guide. It’s got over 79 different recipes from us, and our favourite vegan creators. Enjoy!

What type of potatoes should I use?

We think that new potatoes, maris pipers and russet potatoes all make lovely vegan hasselback potatoes. The key is to select potatoes that are all a similar size so that they cook evenly.

You could also make them with sweet potatoes!

Can I use different herbs?

Of course! The great thing about cooking from scratch is that you can make it exactly how you like it.

This recipe uses thyme, but you could try making your vegan hasselback potatoes with rosemary, sage or parsley instead. We don’t think that coriander would work, unless you went for a mixture of herbs and spices too, because it can be quite overpowering.

Can I make them ahead of time?

You can! Vegan hasselback potatoes will keep for 3 days in the fridge, provided they are stored in an airtight container.

Can I freeze these vegan hasselback potatoes?

Yes! You can follow the recipe as normal, wait for them to cool and then freeze them. Or alternatively you can cook them for five minutes less, before cooling and freezing them. This will ensure that they aren’t overcooked when you reheat them.

Either way to reheat them, chuck them in the oven at gas mark 6/200°C for around 30 minutes, until they are piping hot.

There are a few bits of equipment that will make this recipe much easier for you, and will benefit your kitchen life as a whole.

We can’t emphasise enough how important it is to have a good quality, sharp knife when you’re cooking. You will find it much easier to make precise cuts and get even slices with a sharp knife. Not only that, but cooking with a sharp knife is actually much safer.

Blunt knives can slide off of whatever it is you are chopping and slice your hand if you aren’t careful, whereas a sharp knife is much easier to control.

We love using chopsticks to eat noodle dishes like our vegan pad thai! And they are great to have around for this recipe, as they will help you to get the slices just right.

It’s surprising the difference having a decent roasting tray can make. Good roasting trays distribute heat much more evenly than poorer quality ones. This means that you’ll find that your food cooks more evenly, and that it doesn’t stick to the bottom which is always nice! 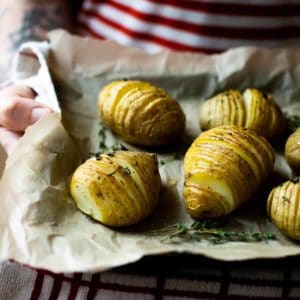