When we think about going for a curry (have we mentioned that we love curry?) one of the things we look forward to the most is a yummy Saag Aloo. Anything with potato in it is bound to be a winner right?

Saag Aloo is one of the most popular North Indian dishes in the world, so we had to figure out a way of making a vegan version! This version tastes exactly like one you would get from a takeaway, and it’s ready in just 25 minutes.

Is this an authentic Saag Aloo?

As with a lot of authentic Indian dishes, the method is almost more important than the ingredients. We’ve done our best to recreate our favourite takeaway style Saag Aloo by paying close attention to the way that we cook it.

For this dish, as with many other Indian favourites, the key is to ensure that you properly cook down the onions. It’s well worth the extra effort.

Traditionally Saag Aloo isn’t vegan because it is made with ghee, which is a highly clarified form of butter traditionally used in Indian cooking.

Our Saag Aloo is 100% vegan because we’ve used oil instead. A lot of the time Indian takeaways don’t use dairy ghee as it’s cheaper for them to use non-dairy, but it’s always worth checking just in case.

You’ll need a few spices to get the traditional Saag Aloo flavour just right, but they’re all quite common and can be picked up in any supermarket. You will need:

For the quantities, take a look at the recipe card below.

How to make Saag Aloo

This vegan Saag Aloo is really quick and simple to make, so it’s a wonderful addition to a curry night at home!

The recipe card at the bottom of this article has details on the temperatures and measurements.

What to serve with Saag Aloo

When we have a curry night, we like to go all out and have as many different types of curry as possible! This Saag Aloo works well as a main dish, or you could have it as a side dish alongside one of our other favourites:

Typically Saag Aloo isn’t that spicy, and this recipe doesn’t use all that much spice so it’s pretty mild. That being said if you want to make it spicy, feel free to throw in some extra chilli!

Do you have to use spinach for Saag Aloo?

The word ‘Saag’ means spinach or leafy vegetable, so you’ll need to use some kind of dark leafy green. You could try making this recipe with a dark leafy green other than spinach, like mustard leaf, collard green or cavelo nero, if you like.

Can this Vegan Saag Aloo be frozen?

Definitely! Be sure to freeze it in individual sized portions, and then you can easily defrost some when you want a quick side to go with a dinner.

It should keep in the freezer for three months.

What Equipment will you need?

As with any recipe, having the right equipment will make this dish a whole lot easier to put together!

Large pan with a lid

This is essential for cooking down the onions, without the lid you’ll lose moisture and the onions could burn. We use our pan every time we need to simmer anything, so for curries, stews, pasta dishes… the list goes on! We love this Scoville 3 Piece Saucepan Set, and would definitely recommend them. The big pan is perfect for cooking this dish.

We can’t stress enough how much easier life is with a potato peeler that actually works! We tried to get by with the old rubbish one in the bottom of the drawer for a while, and it resulted in us nearly injuring ourselves multiple times. It pays to get one like this Vegetable Peeler by OXO – it's the one we use.

The 'Y' shape makes it easy to peel potatoes (and any other vegetables), it has good grip and it's sturdy too!

We love our measuring spoons, it makes it so much easier to work out ratios. Plus it makes using recipes from the US an absolute doddle, no more converting everything into grams!

Would you like to try even more amazing vegan Indian recipes? Then head on over to our ultimate list: 60+ Vegan Indian Dishes [That Anyone Can Make]! 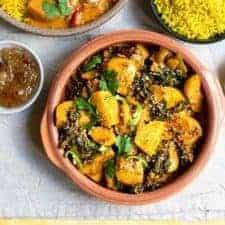 Vegan Saag Aloo is great as a side on a curry night, or as a main. It's deliciously fragrant and mild, plus it only takes 25 minutes to make!
5 from 3 votes
Print Pin Rate
Course: Sides
Cuisine: India
Prep Time: 5 minutes
Cook Time: 20 minutes
Total Time: 25 minutes
Servings: 4
Calories: 203kcal
Author: Jess & Dan

If you'd like the Saag Aloo to be spicy, double the chilli powder or add in a chopped fresh chilli.