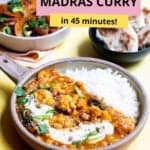 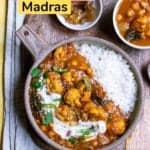 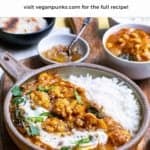 If you’ve been following our blog for any time at all, you’ll know we’re curry addicts! This vegan cauliflower curry with a madras style sauce is something that we make regularly to satisfy our cravings for an Indian takeaway.

A fairly spicy, tomato-based sauce with a slight tang makes it a really delicious and vibrant dish. We’ll order a madras 90% of the time from our local takeaway, and it’s always nice to be able to recreate the food you enjoy in restaurants at home.

The madras curry paste is so simple to make and much better than buying a jar from the supermarket. Don’t be put off by having to make a paste from scratch, it’s honestly as easy as throwing some ingredients into a blender.

That being said, this recipe works great with a shop-bought paste, if you can't or don’t want to make your own. We’re not going to sit here and pretend we make every single meal ever from scratch!

Madras curries are usually pretty spicy as they feature a good amount of chilli powder. It has a tomato based sauce but with a really rich, tangy flavour from all the spices and vinegar (which is used for the paste). If you’re not a big fan of spicy food, it’s very easy to just reduce the amount of chilli powder. You can also add yoghurt to the dish, which is a traditional way to reduce the heat in a madras.

We decided to use cauliflower in this madras curry because it's such a versatile ingredient. It takes on flavours really well. We make sure to only simmer the cauliflower for around 15 minutes in the sauce, so that it keeps a nice 'crunch'.

When we made this exact curry for our friends they said they really enjoyed the crunchy 'bite' to the cauliflower, and that they'd never thought to include it in a curry before. What do you think? Do you enjoy cauliflower in a curry? Let us know in the comments!

We would recommend combining this vegan cauliflower curry with these dishes:

Mushroom bhaji – a traditional Indian side dish, that’s quite dry but full of flavour. It’s not like an onion bhaji though!

If you're looking for even more curry recipes, check out this list of vegan curries from around the world. And if you're feeling adventurous, try this Fried Idli too.

Where does it come from?

Well, it comes from India, but the word 'Madras' isn't used in India. The name is thought to have been coined by English merchants who went to Chennai in 1640. Typical.

According to Wikipedia, the name 'Madras' is only used in British restaurants, and not in India. It is thought to have been named after a fishing village 'Madraspattinam' or a fisherman named Madrasan.

Some sources even suggest it may be a British curry, with origins in the Midlands, much like the balti. We're not sure which story is right, but we know that they did something special when the madras curry was invented. It truly is delicious. Jess grew up in the Midlands and her dad would regularly make a madras., That’s probably where she first fell in love with this dish and served as the main inspiration for us creating it!

From the research we've carried out, we’ve tried to make our madras paste closer to a traditional recipe. It uses chilli, turmeric and gets a slight sourness from the malt vinegar.

Does this cauliflower curry freeze?

Yes! This cauliflower curry freezes easily, and will last for 3 months in the freezer. We love filling the freezer with delicious and tasty food. It means when we’re feeling lazy we can have a night off cooking! That’s if we remember to defrost it first of course, as we don’t have a microwave!

Can I make it less spicy?

Of course. We often make recipes pretty spicy in our kitchen, especially where that’s what the traditional version would be like. In the case of our vegan cauliflower curry, you could use less chilli powder or add yoghurt to the sauce to cool it down (or both!).

Can I just use a shop bought paste?

Definitely! We have done, and it’s still tasty. We recommend the Patak's madras paste, and it is vegan as it comes.

What other vegetables can I use?

If you don’t like cauliflower, this recipe works well with so many other vegetables. We’ve used all kinds, such as broccoli, sweet potato, peppers and courgette! Most of our recipes just mention particular vegetables as a guideline, but really they’re here as a base for you to get creative with!

Using vinegar to make the paste seems a bit odd – do I have to use malt vinegar?

Nope! Some traditional recipes use tamarind for a base level of sourness and then don’t add any vinegar, or just use a little. So, you could use tamarind paste. You could also just cut the sour flavour out if it’s not for you – you do you! 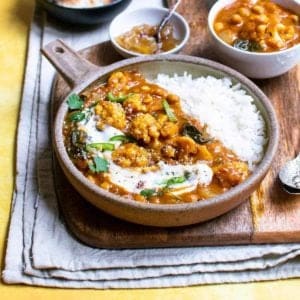