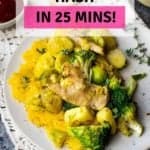 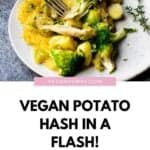 Vegan potato hash is super quick to make (just 30 minutes) and needs just 8 ingredients. And it feels really comforting, even though it’s packed full of veg and actually pretty healthy (ish)! It's the perfect dinner for those nights where you just can’t be bothered to cook properly!

Give it a go if you fancy a one pot meal with minimal effort and minimal washing up. It’s also a great way to use up leftover veggies if you’ve had a roast, or even for leftover roast dinner or Christmas dinner.

We love making this vegan hash as a way to use up leftover veggies and stop them from going to waste. So we've tried our best to make this a zero waste recipe.

For that reason, you don’t have to stick to the ingredients we’ve suggested, you can substitute for whatever you happen to have in the fridge. Some really good swaps include:

When we’re making vegan potato hash we always leave the skins on the potatoes, because the skins are the best bit! Plus, you’ll be doing your bit to prevent waste by not throwing them away.

If you don’t want to include the skins in your meal that’s cool, try baking them to make delicious homemade crisps.

Feel free to switch out any of these ingredients when making your vegan hash, so that you can use up whatever you have lying around. Our suggested ingredients are:

When making vegan potato hash, make sure you give your potatoes enough time to cook through, as they will take longer than everything else.

And that’s it! Serve up this awesome vegan potato hash with lashings of vegan gravy and whatever side dishes you fancy, and enjoy. You could even have extra dijon mustard for serving, or a bit of English mustard, like me. Dan thinks this is weird, but I like it!

Side note: did you know that this Bisto gravy is accidentally vegan? It goes great with this recipe.

Please see the recipe card at the end of this article for detailed measurements and instructions.

What if I don't want to use a meat replacement?

We have made this meal plenty of times without meal replacements. You could try whole food meat replacements (that are made from vegetables rather than 'fake meat') like Fry's or GoodLife, so that you don't have processed food included in the meal. These items may need to be baked then added to the pan at the end.

Can I change the vegetables used?

Yes! Basically, if you would serve it with a roast dinner, it can go in this vegan potato hash. Altogether, you'll need about 600-700g of vegetables. Try a mix of: carrots, cabbage, cauliflower, broccoli, sprouts, green beans, peas or parsnips.

Can this meal be frozen?

Yes, it can be frozen for 3 months. However, if the meat replacement is frozen before adding it to the pan, check the instruction on the packet, as it may not be able to be frozen again.

🥕 What to serve with it

This vegan hash is yummy on it’s own, but you can also pair it with other things to make it into an even more substantial meal.

Try serving your vegan potato hash sitting on top of a bed of delicious, creamy swede mash. This recipe is really simple, you can make it in 25 minutes and it only has two ingredients - what’s not to love?

For that great roast dinner feeling, try serving your vegan hash up with a side of yummy sage and onion stuffing balls. The combination of stuffing and vegetables is the best! Our stuffing balls are also really simple to make, and you can make them gluten free by substituting breadcrumbs for a gluten free alternative.

Anything with potato in it needs some gravy! We really like this vegan gravy recipe because it has a lovely rich flavour from using marmite and nutritional yeast. Serve this meal up with a generous helping of gravy for a really hearty dinner experience.

If you like this vegan hash recipe and you’re looking for other warming and comforting dishes to see you through the winter months, we’ve got you covered!

If you’re looking for even more winter comfort food inspiration, then check out our ultimate guide to vegan Christmas dinner recipes and our 35+ best vegan roast dinner recipes. 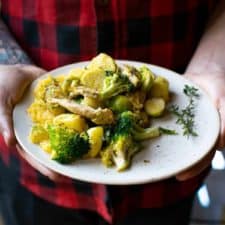