Jambalaya is a traditional Louisianan dish that usually contains chicken and chorizo but this version is all vegan. We've opted to use a vegan chicken that we made using vital wheat gluten, but you could easily use Fry's, Quorn or your favourite plant-based 'meat' brand. That's if you want to use any of these replacements at all!

There's nothing better than trying food from other countries – we absolutely love to find out about different cuisine and cultures. You don't have to miss out when you're a plant-powered punk - we're always hunting down vegan options of traditional dishes when we're on our travels, and love creating our own versions at home.  Jambalaya typically consists of a couple of types of meat (usually at least one sausage), vegetables and rice, so we've used some vegan chicken and chorizo alternatives here to keep it real.

As an added bonus, this is a one-pot recipe so you can spend less time washing up!

We've featured Tubby Tom's King Cajun spice mix in this recipe because we've found it offers the most well-rounded flavour, and he's really good at spices. Check him out if you need hot sauce, spice rubs or even vegan mayo – when it's in stock. 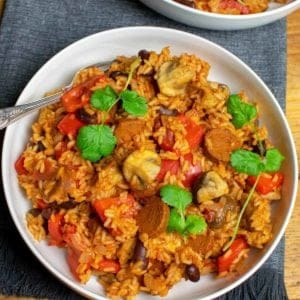