Philly Cheesesteak is certainly not very vegan sounding, and we know there are people that don't 'get' creating something that looks like meat, but for vegans, right? It's OK – we're open to critisism.

This is for those vegans who didn't neccessarily hate the taste of meat, but have chosen to avoid all animal products because they're guided by their moral compass. And, we all know that reducing meat and dairy consumption helps the environment –according to the Guardian, it's the biggest thing you can do to combat climate change.

So, for anyone that's looking out for the planet, doing their bit and reducing their meat consumption, or for vegans who get cravings now and again – this one's for you. 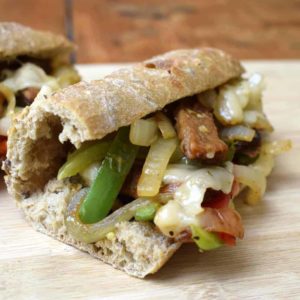