We make this vegan pumpkin pie with real pumpkin every year. As soon as the last rays of summer's sunshine have dwindled away, we start dreaming of all things pumpkin spice, and of course, vegan pumpkin pie is top of the list.

We're all for convenience food, and canned pumpkin is great for saving time, but we choose to make our own pumpkin puree for three reasons, because it's:

In the UK, pumpkins cost around £2 and a can of pumpkin puree is around £1.65. This recipe would need at least three cans of pumpkin puree, should you decide to use canned instead.

How to make pumpkin puree

OK, making your own pumpkin puree is easy! All you need is a baking tray, time and a blender. We don't add any preservatives because we make use of the puree straight away. Just peel and chop the pumpkin into two inch chunks, bake in the oven for around 45 minutes, blend in a high-speed blender and voilà – you've got homemade pumpkin puree!

Even though it would be a lot quicker to use canned pumpkin, we really like the feeling of accomplishment that making your own brings!

Having said that, if you're short of time, there's absolutely nothing wrong with canned pumpkin puree. Using it will knock an hour off the cooking time for this recipe.

It's widely available at the supermarket – especially in America. We've even seen it in Tesco and Waitrose in the UK (true at time of writing), but it may only be in stock for the season, rather than all year round.

What you'll need to make this vegan pumpkin pie recipe:

Here's a video we made in conjunction with vegan energy company, Ecotricity. Do you like having a video to follow? Let us know in the comments and we might make more! 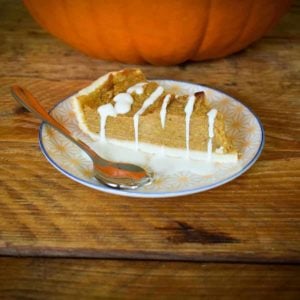