This vegan creamy cauliflower Alfredo is perfect comfort food, and healthy to boot! With it only taking 30 minutes to make, it will become a weekly staple before you know it.

We really love Brussels sprouts (yes, it is 'Brussels' sprouts, not 'Brussel', who knew? Although this may be a British thing?) so we wanted to create a new dish that featured them.

We also love the versatility of cauliflower, so after a bit of experimenting and testing it out on our friend Daisy (she runs awesome vegan events in the UK!), we created have our creamy vegan Alfredo tagliatelle!

Cauliflower is great, isn't it?

Cauliflower is the hero vegans deserve – rice, steaks, sauces – it does it all! A truly versatile ingredient, it easily takes on the flavour of marinades and sauces, and adds a certain 'bite' to dishes when cooked correctly.

So, what is vegan cauliflower alfredo?

Absolutely delicious, that's what! But traditionally, the dish is made with butter and parmesan – two ingredients that aren't very vegan-friendly! Back in 1941, Alfredo di Lelio, a Roman restaurateur created the dish for his pregnant wife, who was struggling with her appetite.

It became famous when two American tourists tried his 'simple pasta' when on holiday in Rome and they ate in Alfredo's restaurant. They took the recipe back to the US, and the rest – as they say – is history.

The dish isn't as well-known here in the UK, so here's hoping our UK readers will love our creamy vegan Alfredo as much as it's loved in the US.

To our American readers – how does it compare? We'd love to know! 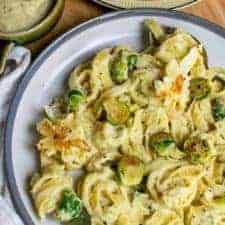