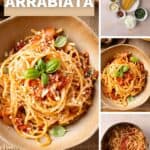 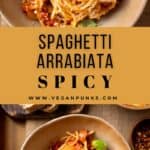 This is the best and easiest spaghetti arrabiata recipe ever! A rich tomato sauce with fiery chilli and fresh basil, that’s perfect for any night of the week. Direct from my Italian Nonna’s kitchen to yours! Great served with indulgent vegan garlic bread.

Check out the recipe card at the bottom of this article for exact measurements to make this easy spaghetti arrabiata recipe.

This is a step-by-step overview with photos for making spaghetti arrabiata (a.k.a. angry spaghetti). The full recipe, along with measurements and detailed instructions can be found in the recipe card at the bottom of the page.

1. Pour a good splash of olive oil into a large pot and bring up to a medium heat. Add the onion and gently cook for roughly 5 minutes until translucent and softened.

2. Pop in the garlic and dried chilli flakes. Stir for 1 minute.

3. Pour the tinned plum tomatoes into the pan. Stir well, and then bring up to the boil, and reduce to a gentle simmer for 10 minutes.

4. Now, grab a potato masher (stay with us!), or alternatively a wooden spoon, to carefully help the tomatoes to break down. Gently press down on the plum tomatoes with the masher until they break down.

5. Simmer for another 40 minutes, stirring occasionally. Keep the pot uncovered.

6. Add in the chopped basil, and stir well.

7. Just before the arrabiata sauce is ready, cook the spaghetti according to the packet instructions. It should take around 10 minutes. Once cooked, drain the spaghetti but don’t rinse it.

8. Season the sauce generously with salt and sugar (optional, but recommended). Finally, stir the cooked spaghetti through the arrabiata sauce until well coated.

What does arrabiata mean?

‘Arrabiata’ is Italian for ‘angry’, so this tomato sauce is actually ‘angry’ or, in other words, because it’s spicy, it’s angry!

Can I add vegetables?

This dish is great with vegetables such as [garlicky mushrooms] or served with a side of [leeks and cabbage]. If you’re looking for a take on arrabiata with vegetables, try our pasta arrabiata which features mushrooms and broccoli in the sauce itself.

Can I freeze it?

It’s best to just freeze the sauce, and not the spaghetti. We don’t recommend freezing spaghetti arrabiata in its entirety but you can make the sauce and freeze that in a container by itself. When you’d like it, just defrost and reheat it thoroughly, and then stir through the spaghetti. We find that pasta and spaghetti don’t freeze and reheat well – it can easily go mushy throughout that process.

Yes, it’s an accidentally vegan sauce! Of course, in restaurants, meat may be added and also egg pasta may be served with it. So, when buying spaghetti in the store, it’s always best to check. Dried spaghetti is almost always vegan though. 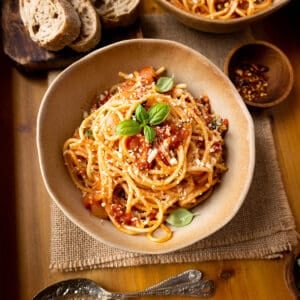