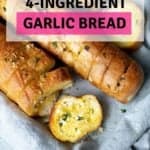 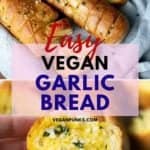 This is the easiest and most delicious vegan garlic bread with just 4 ingredients! And it will be ready in just 15 minutes. A perfect side for most pasta dishes, or a great snack by itself. Goes great with vodka pasta.

Maybe you’re having a spag bol, pesto pasta or even spaghetti arrabiata, and you want something to mop up all of the delicious sauce. Maybe you just want the comfort that only carbs can bring.

The only problem is, a lot of shop bought garlic bread has dairy in it, ugh! Can vegans eat garlic bread? Of course we can! Anything you can eat, we can make vegan. You’ll only need four core ingredients, but you can level-up this garlic bread with all kinds of extras, too!

You only need four ingredients to make this epic vegan garlic bread from scratch!

2. Cut the baguette halves into 1" slices stopping before the bottom, so that each slice doesn’t come away from the baguette. To make it easier, lay the baguette between two chopsticks (lengthways), and slice across the baguette until the knife gets to the chopsticks and comes to a natural stop.

3. Mix the vegan butter, chopped basil and crushed garlic together. If you’re using any extra herbs or nutritional yeast, chuck those in too.

4. Spread three quarters of the butter and garlic mixture evenly in between each slice of slice of baguette, on both sides.

5. Spread the remaining butter over the top of the baguette halves.

6. Grab a non-stick baking sheet, or line a tray with parchment paper. You don’t want your garlic bread getting stuck! Lay both baguettes onto the tray and bake at 180c for 7-8 minutes until the outside is crispy.

7. You’ll know when it’s done because the outside bread will look golden and slightly crisp, but the middle will still be soft. Take it out of the oven and try to get it to the table before eating it all!

The bread – we love using a french baguette to make vegan garlic bread because it’s crunchy on the outside and fluffy in the middle. You could also use a ciabatta if that’s more your style (we have done this numerous times). Do everything exactly the same, just with ciabatta instead!

Level-up your garlic bread! Try adding herbs, nutritional yeast or even vegan cheese if you want to take it to the next level.

The best sandwich of all time – instead of making slices of garlic bread baguette, try making a truly epic sandwich with garlic bread ciabatta.

Cut the ciabatta in half and fill it with vegan sausages and a combination of vegan mayo, sriracha and ketchup. Like in this Instagram post below. Thank us later!

Just don’t go overboard with the garlic. Dan did this once when we had friends over. Turns out there is such a thing as too much garlic, who knew?!

It completely depends where you’re buying or ordering it from, so it’s always a good idea to check. Of course, our dairy free garlic bread is totally vegan, so you’re safe here.

If you’re ordering it in a restaurant, it will most likely use dairy butter. It’s always best to check with the server. They may be able to make a vegan version for you, as lots of restaurants become more and more vegan friendly, this is a lot more common.

Can I freeze it?

Yup! You can even reheat it straight from frozen. It should be fine in the freezer for up to 3 months. When you’re ready to reheat it, chuck it straight in on gas mark 4 / 180°c in the oven for 15 minutes or so, to make sure it’s completely defrosted and hot all the way through.

What bread should I use?

We love using French baguette to make our homemade garlic bread, but a ciabatta works just as well.

I love garlic, can I add more?

Go wild! We’re big fans of garlicky food and while we think we’ve got the quantities just right, everyone has different tastes.

🍝 What to serve with it

This vegan pasta arrabiata is a favourite in our house! It’s a traditional Italian recipe that’s super simple, and incredibly tasty. 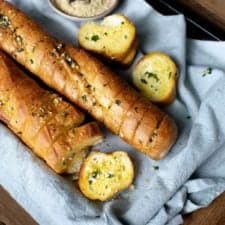