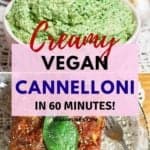 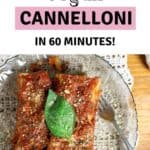 This simple vegan cannelloni recipe is a crowd-pleaser, especially if you’re having people over for dinner. Plus it only takes 60 minutes to make. In addition, it features a dreamy creamy vegan ricotta filling and an irresistibly rich marinara sauce!

And it’s easily doubled so you can have it two nights in a row. If you’re cooking anyway, you might as well make it go further right?

Granted, it’s a little time consuming, but the rich marinara sauce and cheesy herby filling are well worth it! The simple flavours go down a treat with kids and adults alike, which makes it great for family dinners, too.

We created this vegan cannelloni recipe back in 2017 when it was requested from our Instagram followers. Not one to back down from a challenge, so we gave it a go.

We think we’ve pretty much smashed it, but we’ll let you be the judge of that! We’re thrilled to be able to update the post today though, even though our cooking and recipe development skills were on point in 2017, our blog post writing skills were not. See: non-existent!

For the vegan ricotta

If you’re making our vegan ricotta, you will need macadamia nuts, lemon juice, garlic, nutritional yeast, white miso, water and a pinch of salt. Check out the recipe card below for detailed quantities.

If you’re making our vegan ricotta, which we’d definitely recommend, it’s pretty simple. Grab all of the ingredients, chuck them into a blender, blitz them up and you’re done!

A good vegan cannelloni should come out of the oven with perfectly cooked golden pasta and a healthy layer of sauce on top. Start by preheating your oven to gas mark 5/180°C. While the oven is heating, you can start preparing the cannelloni.

We’ve found that the easiest way to fill cannelloni tubes is by using a piping bag! That way each tube will be filled evenly, so each bite of your vegan cannelloni will be packed with flavour. There's simple to follow steps below for filling the cannelloni tubes.

A note about vegan ricotta

Our vegan ricotta is super easy to make. It’s made mostly from macadamia nuts, which you blend with the other ingredients. There’s no cooking involved. We've included the recipe for this below.

Can I use a store-bought vegan ricotta?

Absolutely, if you have one. It’s important to choose a vegan ricotta that doesn’t melt too much, as it’s what gives the filling texture. For truly delicious vegan cannelloni, you’re looking for a relatively ‘chunky’ texture.

A lot of coconut oil-based vegan cheeses pretty much disappear when you put them in sauce, so bear that in mind. We recommend nut-based vegan ricotta. Or make your own with the recipe we've included!

We’d recommend using fresh or baby spinach rather than frozen. That's because frozen spinach doesn’t have as much flavour, and it releases a lot of water which will ruin the texture.

Make sure that the tubes are fully covered in the dish before they go in the oven. This will ensure that they cook properly, so you don’t end up with partly crunchy cannelloni tubes!

Is cannelloni the same as lasagne?

Nope! The main difference is in the shape of the pasta. Lasagne comes in sheets, and cannelloni comes in tubes. Lasagne is made by layering sauces (a creamy white sauce and a ragu sauce) between the pasta sheets.

In comparison, cannelloni is made by stuffing pasta tubes with a mixture and then topping them with marinara sauce.

Cannelloni isn’t typically vegan. It’s traditionally made with a meat ragu sauce, or a vegetarian version is often made with spinach and ricotta.

We decided to make this vegan cannelloni like the vegetarian version, but without any dairy.

Can this be made gluten-free?

It can! Just find some gluten-free pasta tubes and this is completely gluten-free. In addition, if using store-bought vegan ricotta, you may also need to check that’s gluten-free too.

Yup! Just make sure that it’s completely defrosted before baking again. Alternatively, you can bake from frozen for around 40-50 minutes on gas mark 5.

Also, make sure that it’s completely cool before putting in the freezer. We don’t want it to raise the temperature of the things surrounding it in the freezer!

Definitely not! The beauty of vegan cannelloni is that it all cooks together in the marinara sauce in the oven.

The tubes should be filled while uncooked and dry, then baked in the sauce. They will cook just like pasta would in water, only in the sauce instead - which makes them extra tasty!

🥖 What to serve with it

🍝 Other recipes to try 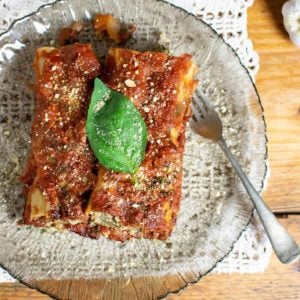 Vegan Cannelloni with Spinach and Ricotta