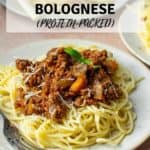 This Vegan Spaghetti Bolognese (or ‘vegan spag bol’ if you’re in the UK) is a classic. It’s packed with protein, herbs and has that great umami-rich flavour that all spaghetti bolognese lovers crave! It needs a long simmer time, but that’s how the plant-based bolognese becomes a rich, thick and comforting ragu. It’s based on a recipe we’ve been making in various iterations for years and years. Hope you love it as much as we do!

Long time readers will notice this recipe has had a bit of a makeover. Rest assured that it’s only the photos that have changed, and we’ve tweaked and improved the method too.

As usual, you don’t need any fancy equipment to make this recipe. You’ll do best by using a large stockpot or large sauté pan (like in our process pictures below). You’ll also need a sharp knife and stirring utensils. We always recommend a garlic press too as it’s so much quicker than chopping garlic by hand!

These instructions are intended as an overview to go with the visual representation of making the meal. For in-depth instructions, the full ingredients list, nutritional information and notes, head to the recipe card at the bottom of the page.

1. In a large saucepan, add a splash of olive oil (or oil spray) and bring up to a medium-high heat. Add the onion and cook for a couple of minutes until softened.

2. Now add the garlic, tomato purée and dried herbs, and cook for another couple of minutes.

3. Chuck in the carrots and mushrooms, cook for 5 minutes, stirring frequently.

4. Next, pour in the chopped tomatoes, stir through, bring to a boil and then immediately reduce to a simmer. Cook for 5 minutes.

5. Stir the vegan mince in and simmer for 1 hour, stirring occasionally.

6. Once the vegan bolognese has been simmering for 45 minutes, put the pasta on to cook. It should take around 10 minutes.

7. Season the bolognese to taste with salt and black pepper.

8. Just before serving, stir the fresh basil into the bolognese.

As always, we’ll put the disclaimer out there that we’re not nutritionists. However, to us, this seems like a semi-healthy recipe. Of course, vegan mince is a processed food, which isn’t the healthiest food ever, but aside from that this recipe is low oil and contains some pretty healthy ingredients.

Can this vegan spaghetti bolognese be made ahead of time?

Yes, it can definitely be made ahead. It keeps well for 3 days in the fridge. If you’re making it for a dinner party you can make the ragu in advance, keep it in the fridge until needed, but cook the spaghetti just before serving, so it doesn’t dry out.

Yes! Vegan spaghetti bolognese freezes well. Portion it out and freeze, labelled with the date and what it is. Perfect for when you want a satisfying meal but don’t want to cook!

🍝 What to serve with it: 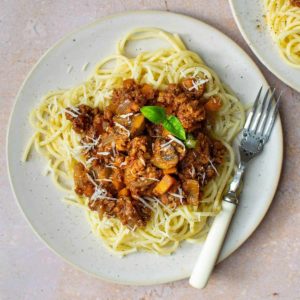