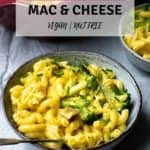 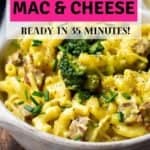 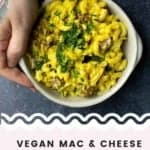 This is our take on a classic mac and cheese, comforting and complete with delicious salty ‘bacon’ bits. We’ve created our vegan baked mac and cheese using only 8 ingredients, and it’s completely nut free!

When we’re making a dish like this we often use cashews for creaminess, but this time we’ve gone nut free to suit all dietary requirements. It can also be a gluten free vegan mac and cheese by replacing the flour and macaroni with gluten free versions. And making sure the plant milk is gluten free too.

🧀 How to make vegan mac and cheese

It’s actually a lot simpler than you might think to make our delicious nut free vegan mac and cheese.

Start with a simple vegan roux (a mixture of vegan butter, plant based milk and plain flour). Add in some vegan cheese, nooch and turmeric. Then cook some pasta and mix it through the sauce, top with vegan cheese and bake for 15 minutes. And that’s it!

We’ve found that the best way to get the vegan cheese to melt is to cover the dish whilst baking in the oven. That's how to get your vegan baked mac and cheese to have a really delicious melty cheezy topping.

We aren’t exactly sure why, but this makes vegan cheese melt much more effectively than if you leave the foil off. It may be because the heat doesn't escape from the dish!

You only need 9 ingredients to make this vegan baked mac and cheese, and you can find them all in your local supermarket!

For detailed measurements and instructions, head to the recipe card at the bottom of the page.

The key to making vegan baked mac and cheese is starting with a great roux for the white sauce. This is the base of the recipe.

And there you have it, a simple vegan mac and cheese!

For detailed measurements and instructions, keep reading to the recipe card at the end of this article.

🥕 What to serve it with

Our vegan baked mac and cheese is filling and substantial so it’s definitely a meal by itself! However, if you really want to treat yourself you could serve it up with a side of our vegan garlic bread which is made with ciabatta and is really something special.

We love pasta! It’s so versatile and filling, it’s perfect for those nights where you’ve had a long day and you just want something delicious and comforting. Some of our favourite pasta dishes include:

As you might expect from us, this vegan creamy mushroom pasta has lots of garlic in it, and it’s absolutely lovely! The meaty-ness of the mushrooms compared with the creaminess of the sauce makes it a really satisfying dinner.

We couldn’t really list pasta dishes without talking about a classic spag bol now could we? We make our vegan spaghetti bolognese using vegan mince so that it’s really close to eating the meaty original. To get the most out of the awesome flavours, we add a splash of vegan Worcestershire sauce too.

This one sounds odd, but trust us, everyone we’ve made it for has absolutely loved it! Definitely not one for when you’re on a health kick, this vegan cheeseburger pasta bake is another one that makes great use of vegan mince. Trust us, you’ll love it.

Another one that sounds a little strange, but we promise you it's an absolute winner! We are curry fiends (as you may already know), so it’s probably not surprising that we came up with a vegan curry pasta recipe. Isn’t it great not having to choose between two favourites?

Can this be made gluten free?

Most definitely! Just switch out the macaroni and the flour for gluten free alternatives.

Can I use any other plant based milk?

Yes you can, just be sure to choose one without a strong flavour and that is unsweetened. We recommend oat, soy or coconut milk for this vegan baked mac and cheese.

We wouldn’t suggest using a nut milk like almond or cashew as they usually have a distinctive flavour, which will affect the taste of your meal. Sweetened milks also won’t work well if you’re making a savoury dish, the sauce would end up very sweet.

We use the Barista version of Oatly as it has a higher fat content (than other types), which means that it creates the richest and creamiest sauce.

Pasta freezes well. It's just important to defrost it by leaving it out overnight or in the microwave. And then be gentle when stirring it while heating, to make sure it doesn't break up! 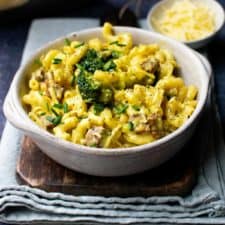