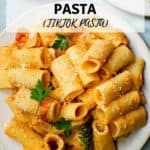 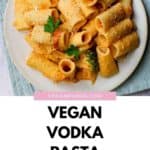 Vegan Vodka Sauce Pasta is probably something you already know and love from TikTok. It’s creamy, indulgent and rich with tomatoey goodness. We were cool before this went viral on social media, because we published this way back in 2018. For long time readers, it has just had a glow up – the recipe is still the same.

You’ll need just one large pot, a sieve to drain the pasta as well as a blender to make the cashew cream.

Check out the recipe card at the bottom of this article for exact measurements.

These instructions are an overview to go with the visual step-by-step process. Head to the recipe card at the bottom of the page for full instructions, ingredients and notes.

1. Soak the cashews in boiling water for an hour, the water should just cover the cashews. Once soaked, blend until smooth (with the water).

2. Cook the pasta according to package directions, drain and set aside. Rinse with cold water to help prevent the pasta from sticking together.

3. In the same pan, fry the onion for 4-5 minutes over medium heat until soft. This can be with a splash of oil, oil spray or dry frying (optionally with a splash of water). Add the garlic and fry for another minute.

4. Pour in the tomatoes and vodka, stir well and then bring to a simmer.

6. Stir in the cashew cream, vegan parmesan and butter (optional), until you have a lovely pink sauce.

7. Next, add in the cooked pasta and stir until every piece of pasta is coated in the sauce. Make sure it’s piping hot and then serve.

Can you freeze vodka sauce?

Yes, vegan vodka sauce can be frozen. Freeze just the sauce, defrost and then add cooked pasta and broccoli for best results.

Yes – standard vodka is always vegan! In addition, almost all alcoholic spirits are vegan. If they’re flavoured, it’s best to check what flavourings have been used, but that wouldn’t be relevant for this recipe.

Generally not, that’s because it would usually contain dairy cream. However, our version is a dairy-free vodka sauce as we use cashew cream instead of dairy cream.

Can you make vegan vodka sauce without vodka?

Yes – absolutely. You can make this dish without vodka, simply omit it. The sauce will still be delicious but will taste different, of course.

Does vodka burn off in vodka sauce?

Yes, don’t worry about getting drunk by eating this! Almost all of the alcohol will cook off, and it doesn’t need a long simmer time for this to happen either. 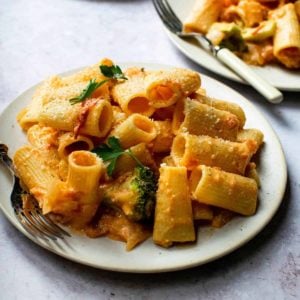