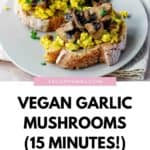 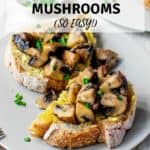 Vegan garlic mushrooms are super easy to make, are absolutely delicious and only need four ingredients too. They make perfect garlic mushrooms on toast, or served as part of a big breakfast. They can even be turned into creamy garlic mushrooms with the simple addition of oat cream.

Keep reading to find out how to make vegan garlic mushrooms in 15 minutes...

These vegan garlic mushrooms are super simple to make so you don’t need any fancy equipment. You’ll just need a large sauté or frying pan, a spatula for stirring and maybe a garlic press if you don’t want to chop the garlic using a knife.

Top tip: using a large pan will mean that the mushrooms aren’t overcrowded – they need enough space to fry, and if they’re packed in some of them might only steam.

1. First of all, chop the mushrooms into quarters, slice the garlic and finely chop the chives.

2. Put the vegan butter in a large saute or frying pan and allow it to melt over a medium heat.

3. Pop the garlic in and let it bubble in the melted butter until fragrant. Garlic burns easily,  but this shouldn’t be a problem as the heat is on medium, and you should keep it moving in the pan with a spatula.

4. Add the mushrooms and cook until they start to release water. Stir them well so that they get a nice coating of vegan butter and garlic. Let the vegan garlic mushrooms cook for around 5-7 minutes, until most of the water has been released and cooked off. If you don’t want to wait for it all to cook-off, you could just drain the water away!

5. Sprinkle in the chives and stir well.

6. Season with salt and pepper. If the vegan butter is salty, you may not want to add much (or any) salt so be sure to taste it first! Serve on toasted sourdough or crusty wholemeal bread, and enjoy!

What variations can I make?

As this vegan garlic mushroom recipe is super easy to make, there are some simple variations you can make. Try adding oat cream (or other vegan cream) to make a creamy vegan version. Instead of chives, you could substitute spring onions or leeks, or even shallots. If you don’t have vegan butter, you can use olive oil.

What type of mushrooms should I use?

We recommend chestnut mushrooms because we think they’re the meatiest and generally, the tastiest. You could alternatively use oyster mushrooms, portobello or portobellini mushrooms.

Can you freeze garlic mushrooms?

Technically, yes these mushrooms can be frozen but we don’t recommend it. That’s because mushrooms don’t hold their texture when reheated from frozen. When chestnut mushrooms are reheated after freezing we find them to go leathery and limp. For this reason, we recommend that they are eaten fresh!

They will keep in the fridge for two days. However, to follow on from the advice above, we recommend that they are eaten when they have been freshly cooked for best results and the most enjoyment.

🍛 What to serve it with:

These mushrooms are great served by themselves on buttered sourdough or freshly baked bread from the bakery, or as part of a bigger breakfast. It's great with:

If you liked this vegan breakfast, try these out next: 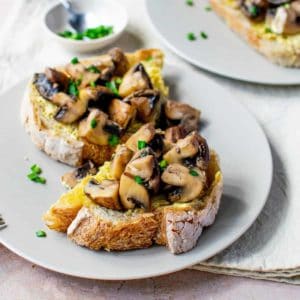