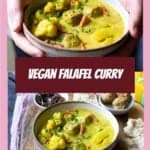 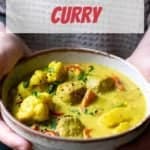 Falafel curry, are you mad? We hear you, but don’t knock it until you’ve tried it! GoodLife’s lemon, cumin and coriander falafel go perfectly with our vegan korma sauce. It’s a lot like an Indian kofta curry. The falafel make for the perfect meat-free alternative to the traditional Indian meatballs.

When GoodLife reached out to us to ask if we wanted to create a recipe using their falafel, we knew it had to have a Vegan Punks twist on it. Don’t get me wrong, we love pitta bread stuffed with hummus, falafel and all the trimmings as much as the next person. But we wanted to get creative.

When we got our hands on the box and saw the words “lemon, cumin and coriander” on the front, our minds went to the same place. It’s got to be curry, hasn’t it? Though, if you’ve been visiting our site or hanging out with us on Instagram for some time, you may wonder when our minds don’t go there!

We’ve been thinking about creating a vegan korma for some time now. So, when it came to creating our falafel curry, we figured there was no better time. Falafel almost always comes with hummus, which is a pretty creamy condiment. We figured that a rich, creamy vegan korma sauce would be the perfect twist on things.

This falafel curry is pretty simple, by design. We love those easy dinners that, beyond the chopping and prep at the beginning, take little effort. We thought this recipe would lend itself really well to that, with the falafel being ready to cook. That’s why we decided to go for a mix of spices, rather than having to prepare a paste.

The base of the curry is:

To get that creamy sauce you expect from a korma, we went with coconut milk. But to build on that even more, we stir in some yoghurt at the end. The sauce features:

You know we love to pack our recipes with healthy ingredients. We were pleasantly surprised when we read the GoodLife falafel box. Reading the ingredients was like reading the beginning of a recipe. Nothing unusual, no stabilisers, thickeners, gelling agents etc. They’re completely wholefoods – basically chickpeas, onion, herbs and spices. All good stuff!

We used the whole box of 14 falafels for 4 people. We just had to fight over who got the extra two!

To add even more goodness to our falafel curry, we used lots of veg:

A couple of tablespoons of fresh, chopped coriander stirred in at the end finished it off perfectly.

How to make falafel curry

First things first, get the falafel in the oven. The instructions on GoodLife’s packaging were perfect. Getting that brown on the outside of the falafel not only makes them look the part, but it adds to the texture. It doesn’t matter if they’re ready before the curry is – they’ll heat through in the sauce anyway.

As with all good curries, it all starts with onion:

What to serve with this dish

Obviously we’re not talking about any old falafel dish here! Our Indian twist of making a falafel curry and serving it with a vegan korma sauce calls for some different sides. Here’s what we went for:

Super fluffy vegan naan bread. Rather than pitta bread, we of course had to have naan! Perfect for mopping up all that delicious sauce.

Brinjal (aubergine) bhaji. Our absolute favourite Indian side dish. We order one of these every single time we get a takeaway, so we created our own recipe!

Inspired to try even more Indian style recipes? Try some of these best ever vegan Indian dishes that anyone can make!

Of course! We regularly use up any vegetables that we have in curries. It’s one of the reasons we love them so much – they’re versatile. We’ll put anything from broccoli and sweet potato, to Brussels sprouts and aubergine in a curry. Get creative and make our falafel curry your own!

It can – you can keep it in the freezer up to around 3 months. Just make sure it’s thoroughly defrosted before reheating, then make sure it’s piping hot!

Falafel isn't just for mezze platters or serving with hummus! No sir. Now delicious in curry too! Give it a try, we're sure you'll be pleasantly surprised.

You can cook the veg for a bit longer if it's your preference. Just be careful not to cook off too much of the sauce! If that does happen, you can add more yoghurt or a couple of tablespoons of water.