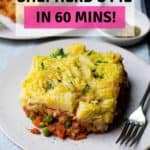 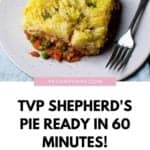 Our TVP shepherd’s pie is a vegan take on the classic British dish.

Sometimes people like to use lentils or another meat replacement to make vegan shepherd’s pie. However, we really love using TVP (textured vegetable protein).

It’s got a great texture and is really filling which means it’s perfect for this recipe. Plus, it doesn’t take ages to cook like lentils.

Shepherd’s pie was originally created as a way of using up leftover roasted meat, and back in the day, the sides and bottom of the tray were sometimes lined with potato, as well as the top.

We’re definitely on board with this top-level potato game from way back when!

Today, the dish is a firm favourite because it’s so hearty and comforting. It’s definitely one of our go-to meals on a chilly Sunday.

Thanks to the secret ingredient (which we’ll tell you about shortly!), our shepherd’s pie has a similar yummy umami flavour to the original.

This vegan shepherd’s pie recipe is made using TVP, which you can buy online or in most health food stores. You will need:

For detailed quantities and instructions, please see the recipe card at the end of this article.

Making TVP shepherd’s pie is a great activity for a lazy Sunday afternoon. Although it takes a little while, the cooking process is quite slow and relaxed. Some might call this ‘staged cooking’. This is when you take your time, doing each part as and when it fits into your day.

For detailed measurements and full instructions please see the recipe card at the end of this article.

Bisto ‘beef’ gravy (in the red pot) is vegan and is a great way to add extra umami flavour.

If you don’t have Bisto, you can use your favourite vegan gravy granules or a tablespoon of miso paste instead.

🤔 What is textured vegetable protein?

It can be used in a variety of different dishes including this TVP shepherd’s pie, but also works well in chillis, stews, burgers or burritos. Using it in any type of dish that would need a mince meat or vegan chicken replacement works too.

It’s dried and usually comes in either chunks or flakes. As it’s dried, you can keep it in your cupboard for a long time. Therefore it's a great item to keep in the cupboard so you always have a good protein source on hand. Perfect for when you fancy a quick chilli or TVP shepherd's pie!

It’s also incredibly lightweight, so doesn't take up lots of cupboard room, unlike vegan mince that's kept in the freezer. As the TVP swells up as it rehydrates, one pack actually goes much further than you might think!

What is TVP made from?

TVP is most often made from soy protein, but it can also be made from cottonseed, wheat, sunflower seeds or oats. It’s made through a process called extrusion, which basically means forcing material through a small opening to form a shape.

When it’s dry, TVP has a protein level of around 50%. This drops to around 16% when it rehydrates during the cooking process. This is still a great source of protein.

What if I don’t have or don’t like TVP?

If you don’t fancy using TVP, you can make a delicious vegan shepherd’s pie by switching it out for lentils or meat free mince (which you can usually find in the freezer section of the supermarket). If you use lentils, then add 15 minutes onto the simmering time in the pan to allow them to cook through properly.

Yes, it freezes really well. This recipe makes eight portions, so if you’re feeding a family of four you could even divide it up into portions and put it in the freezer for a rainy day!

We used carrots and peas in our TVP shepherd’s pie (or petit pois which we think taste nicer than peas!) because it’s traditional, but you could rock the boat by using sweetcorn, green beans or even a mix of all four. You could even try switching out the potato for sweet potato, if you like. Or try a 50/50 split of sweet potatoes and white potatoes?!

🥕 What to serve with vegan shepherd’s pie

This TVP shepherd’s pie is a complete meal in itself. But it goes really well with a delicious helping of veg on the side. Check out these extra special veg dishes if you’re after some inspiration:

Once you realise that they absolutely shouldn’t be boiled to death, sprouts really come into their own! They've actually become one of our all-time favourite veggies! Check out these tasty vegan roasted brussels sprouts, which are made extra special with a miso and maple syrup glaze.

Our ultimate leeks and cabbage recipe is a lighter take on the more traditional creamed leeks and cabbage. It’s super simple with just three ingredients, and only takes 25 minutes to prepare! So it would be easy to knock up while your TVP shepherd’s pie is cooking.

Maple roasted carrots and parsnips go really well with vegan shepherds pie. That's because their sweetness contrasts beautifully with the umami flavour. They also have a nice crunch to them, which goes well with the softer texture of the shepherds pie.

Alternatively, you could just steam some of your favourite veg!

Other comfort food classics to try:

If you'd like even more classic British comfort foods, then head to our ultimate guide to make the perfect roast dinner. 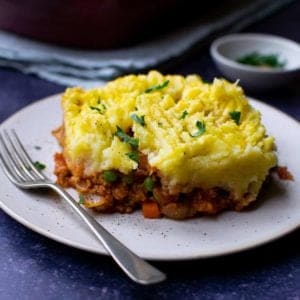