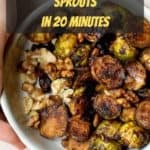 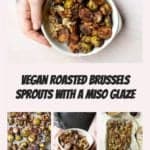 For those of you who think that sprouts are gross, we’re here to prove you wrong with our vegan roasted Brussels sprouts! They are little parcels of deliciousness, which only got a bad name when people decided to boil them to death. Why would anyone think that was a good idea?

This special take on sprouts will make your roast dinner or Christmas dinner plate even better. We use a sticky miso and maple glaze, then add walnuts for a tasty crunch. Walnuts taste amazing toasted and finish this dish off perfectly.

You might not be shocked to learn that our vegan roasted Brussels sprouts have a bit of an Asian twist! As you know, here at Vegan Punks we cook a lot of Asian-inspired food and Christmas food is no different.

These sprouts take only 20 minutes to get ready, and they have just 6 ingredients so they’re nice and simple, as well as tasting awesome.

How to prepare Brussels sprouts

We absolutely love a sprout plant, they just look so cool! They are a bit of a pain to deal with though, which is one of the reasons we usually buy our sprouts from the supermarket where they will have been removed from the plant in advance.

When you’ve got your bag of sprouts, there’s just a few things you do to get them ready for roasting:

Alternatively you can buy prepared sprouts, and all you’ll need to do is cut them in half.

If you want to make these banging roasted Brussels sprouts, you will need:

How to cook sprouts

Making these vegan roasted Brussels sprouts is nice and easy which is great news! You’ll want to start by preheating your oven, and while it’s warming up you can start getting everything ready.

And there you have it! The perfect vegan Brussels sprouts recipe. Check out the recipe card at the bottom of this page for measurements.

What to serve with roasted Brussels sprouts

These roasted Brussels sprouts are beautiful as part of a roast dinner on a chilly winter's night, or of course as part of your Christmas dinner!

This is what we had for our festive feast this year:

We love this cashew nut roast recipe! The cashews make it extra special, they have lovely creamy flavour that makes it feel like a really indulgent dish. Then we add an awesome gooey cheese layer in the middle to make it even more delicious.

There’s something about roasting them that always makes vegetables taste so good! Try these sticky maple roasted carrots and parsnips to add a touch of sweetness to your plate, they’re epic with gravy.

I mean obviously we’re having yorkshire puddings, they’re one of the greatest things ever created. Did you know they were called yorkshire puddings to distinguish them all of the other batter puddings that were made in different parts of England, that weren’t as light and crispy as the Yorkshire variety? Well now you do!

I think if it was possible, we might have roast potatoes with every meal. They are so crunchy and fluffy and delicious, it’s pretty hard to beat!
If you’d like more vegan Christmas dinner inspiration, then check out our guide 79 Ultimate Christmas Dishes. You can also see more of our recipes, including exclusives that we haven’t published anywhere else, in our e-book A Vegan Punks Christmas.

Can this dish be frozen?

It can! You can reheat the sprouts directly from frozen in 15-20 minutes. However, they do taste better fresh and they’re so quick to prepare that you’re probably better off making them on the day that you want to eat them.

How should I prepare Brussels sprouts?

It’s super easy! All you need to do is trim the stalk end off and discard any loose leaves. Then give them a quick rinse in cold water to remove any dirt or sediment.

How long should I cook Brussels sprouts for?

This depends on your cooking method. In our opinion roasting them is the way to get the tastiest sprouts and that takes around 15-20 minutes.

If you’re boiling them it’s important that you don’t boil them for too long - generally the cook time will be under six minutes. Also, remember how you were taught to cross the bottom? Don’t do that. It will make them go soggy.

Even the best chefs find their jobs much easier if they have the right equipment! Here are three things that we think will make cooking up these lovely roasted Brussels sprouts even more of a doddle (and it was already quite a lot of a doddle to start with!).

We love our cup and spoon measurers. Being able to use a cup or spoon measure means that it’s much easier to see ratio. For example, if you wanted equal parts water to a dry ingredient this is much more easily done with a cup measure than it is messing about with scales and measuring jugs! Plus, it means you don’t need to convert anything when you’re using an American recipe.

A good sized mixing bowl makes it a much easier job to evenly coat your sprouts in the miso maple mixture. Plus you’ll find that it comes in handy anytime you need to bake anything, too.

This is an absolute staple for any kitchen, especially in the colder months when you’re roasting more things! Non stick means that not only will your food cook properly without getting all burnt on the bottom, your job washing up will be a lot easier too. 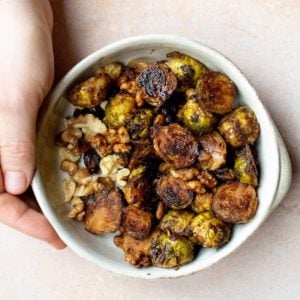 We love sprouts, especially when they're roasted. We use a miso glaze for our vegan roasted Brussels sprouts to give them a big umami hit – plus some walnuts for a bonus crunch.
5 from 1 vote
Print Pin Rate
Course: Sides
Cuisine: British
Prep Time: 5 minutes
Cook Time: 15 minutes
Total Time: 20 minutes
Servings: 6
Calories: 125kcal
Author: Jess & Dan