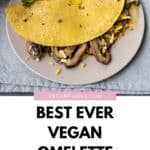 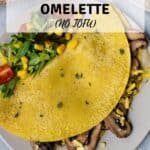 Chickpea flour is the perfect ingredient to create a protein packed eggless omelette! This chickpea flour omelette is quick (10 minutes!) and simple to make and, as well as being delicious, it’s vegan, gluten free and soy free. The combo of chickpea flour and black salt is where the magic happens. Great served with garlicky mushrooms.

Check out the recipe card at the bottom of this article for exact measurements to make this vegan chickpea flour omelette.

This is a step-by-step overview with photos for this recipe. The full recipe, along with measurements and detailed instructions can be found in the recipe card at the bottom of the page.

1. Put the dry ingredients in a measuring jug or bowl and add the hot water gradually while whisking to create a smooth batter.

2. Get a frying pan on medium heat with a little oil, or a few squirts of oil spray, then pour in the chickpea flour omelette mix.

3. Put a lid on the pan and cook for 3 minutes – the top of the omelette should no longer be wet.

4. Optional: if you want to brown the other side, carefully flip and cook for another minute on that side. We find using a spatula helps. This isn't necessary for a tasty chickpea omelette though (and can be tricky!). Then add the filling.

5. Add fried mushrooms and grated vegan cheese, or any other fillings of your choice, to one half of the omelette.

6. Carefully fold the other half over, put the lid on the pan, and allow the vegan cheese to melt for a minute, if using. Repeat the process for each vegan omelette you’re making. Serve hot from the pan or gently heat in the oven to keep warm if making a batch for a group.

How to make chickpea omelette

Mix chickpea flour, nutritional yeast, black salt and water. Pour the batter into a lightly oiled frying pan on a medium heat and cook for 3 minutes with the lid on. You can grab full ingredient measurements and instructions in the recipe card below.

What can I use instead of an egg in an omelette?

Common replacements are chickpea flour (like we use in this recipe), silken tofu or a mixture of both.

What is vegan omelette made of?

Usually chickpea flour (gram flour) is used to make a pancake-style batter mix, like in our recipe. Black salt and nutritional yeast are added to give it an eggy flavour.

How do you substitute egg for chickpea flour?

To make a chickpea flour omelette you have to make a batter with chickpea flour. This replaces the usual whisked egg mix that would be made when creating a traditional omelette. 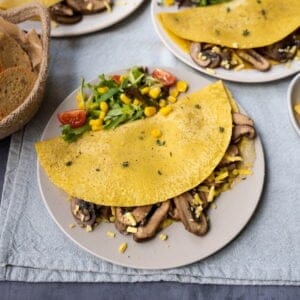