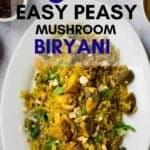 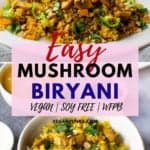 Mushroom Biryani is a curry house classic, this make-at-home version packs in all the flavour without the fuss, in just 40 minutes! And, it's one of our favourite options when we go out for a curry.

Not only is it absolutely delicious, it’s great value too. It’s predominantly a rice dish with vegetables but it always comes with tasty biryani gravy to cover it all in.

Biryani is definitely a popular dish in the UK. It takes a little time and effort to make but it’s absolutely worth it.

Biryani is a dish that originated in Persia, and is characterised by the use of fragrant, long grain rice like basmati.

The whole lot is put in a large pot with a lid where it's cooked over a low flame so that the ingredients are steamed. The layering of the different ingredients means that the flavours combine and create the unique Biryani that we know and love.

Once the rice is cooked, it’s served with a delicious Biryani gravy. Biryani gravy is quite different to British gravy, it’s made with coconut and peanuts, and flavoured with spices. Basically, in the UK it would be called a curry sauce.

Ingredients and spices that are used are traditionally dependent on the region where it it's prepared. Coastal regions, for example, would be likely to use fish, however this recipe is vegan, of course!

We’ve opted for a mushroom biryani recipe because we love the flavour of mushrooms, and we think they have a subtle ‘meaty’ texture that works really well.

To make our recipe for mushroom biryani, you'll need:

For detailed instructions and equipment recommendations, please see the end of this article.

To make Mushroom Biryani you will need a large stock pot or casserole dish with a lid to steam the rice, sauce and mushrooms in the oven. We’ve recommended one that we really like at the end of this article.

We realise that 7 cups is a lot of water! This amount of water is used so that the rice can infuse with the whole spices. This is a traditional method, and it makes sure that the rice becomes fragrant.

Don’t wash the mushrooms with water before cooking. Mushrooms are very absorbent and washing them with water will mean they’ll take on more water and could become soggy. Instead, wipe them with a cloth or kitchen towel. This way they’ll stay firm and ‘meaty’.

Rice freezes really well, but we don’t think that mushrooms do as they can develop a ‘leathery’ texture after being defrosted. If you want to freeze this then we’d suggest that you slice the mushrooms rather than quarter them to try and get around this.

We really like using mushrooms because we think that they add a certain ‘meatiness’ to the dish that you just can’t get with a lot of other vegetables. If you want to replace the mushrooms we recommend using tofu, or another vegan meat substitute.

If you want to replace the peppers and peas, you could try other vegetables such as green beans or carrots. Whatever veg you decide to use, just make sure that you cut them into small cubes (around 0.5cm) so that they can cook properly from the steam.

Is this a traditional recipe?

Traditionally, Biryani would be made with meat or fish which of course this recipe doesn’t use! A traditional Biryani is also more complex and can be quite time consuming to make.

We’ve tried to make this Mushroom Biryani recipe as simple as possible, retaining the essence of the traditional flavour while being relatively quick to make.

🍛 What to serve it with

Mushroom Biryani just wouldn’t be the same without a delicious biryani gravy on the side. Serve it on the side, or just pour the whole lot over your plate - either way it’s ridiculously tasty.

Vegan Raita is the perfect accompaniment to a curry, especially if you’ve gone a bit overboard on the spices! Our vegan raita uses coconut yoghurt and cooling mint and cucumber. Biryani is often served with raita, so this is a perfect accompaniment. You can also use it as a dip for poppadoms!

Is it even curry night without naan bread? A lot of the naan breads you can buy in the shops have yoghurt in them, which means they aren’t vegan friendly. That’s why we decided to create our own.

Other curry recipes to try

If you enjoy this mushroom biryani recipe, then why not give one of our other curry recipes a go? These are a few that we think you'll love: 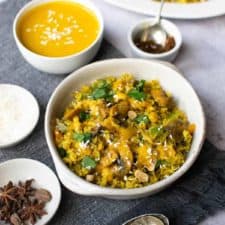