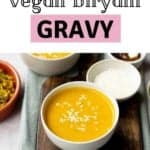 This simple and delicious Biryani gravy really is what makes a biryani so good. It's the icing on the cake (or the chilli on top?!). And this one is super easy to make too. We’ve designed this tasty sauce to go with our Mushroom Biryani. They really go hand in hand perfectly. Don't make one without the other!

🤔 What is biryani sauce?

Often, when people think about biryani, they imagine a dry rice dish. In fact, biryani should always be served with a deliciously fragrant biryani gravy.

It’s made with peanuts, coconut and spices so it’s lovely and rich and creamy. In addition, it has a nutty undertone that complements the spices perfectly.

Our biryani gravy recipe is pretty simple, and made with ingredients that you can pick up in any supermarket. Here are a few notes on the key ingredients, but the full recipe can be found below.

Keep reading for equipment recommendations, and for the detailed recipe card at the end of this article.

A note on the chillies:

When we add the chillies to the biryani gravy, we leave them whole but prick them with a fork so that they can release their fragrant flavour into the sauce without making it too spicy.

It’s really important that you sautè them for the full 15 minutes to get the most flavour out of them. We do blend them into the sauce afterwards, but this is optional. And remember, this biryani sauce is to be served with biryani, not by itself!

A note on biryani masala powder:

Can it be made in advance?

Yes, absolutely! It keeps well in the fridge for up to 3 days, and it even freezes well (just like soup!).

Is this Biryani gravy spicy?

No, it’s pretty mild. However, you can make it spicier by adding more chillies if you like.

What can be used instead of whole spices?

We’d recommend sticking to the recipe if you can because that will give you the best results. You could use ground versions of the whole spices if you can't find whole spices. Be sure to include the star anise, cardamom pods and bay leaves because they are key to the flavour of this gravy.

Why is it called gravy?

In Indian cooking, the sauce in a curry is referred to as gravy. To contrast this, in the UK, gravy is a condiment that is served with a roast dinner!

It would just be silly to make a Biryani gravy and then not serve it up with a delicious Mushroom Biryani! Have it on the side or pour it all over the top, either way they were meant to be together.

If, like us, you like to leave the chillies in your Biryani sauce then you might need a little something to help cool it down… that’s where vegan raita is perfect. It’s a creamy dip made with yoghurt, mint and cucumber which is perfect on the side of a spicy curry, and traditionally served with biryani. Delicious!

You probably don’t need bread with a Mushroom Biryani, but it is tasty! Roti is a savoury flatbread that’s absolutely perfect dunked in Biryani gravy.

🇮🇳 Other Indian recipes to try

If you like our Biryani, we’ve got some other tasty treats that you will love!

And if those aren’t enough choices for you, then check out our guide 60+ Vegan Indian Dishes for some more inspiration! 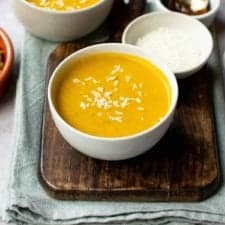