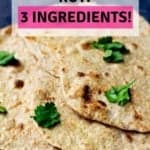 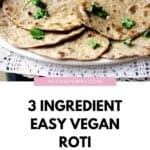 It's a common misconception that making Indian bread is too complicated to make. Well, we’re here to tell you that it’s actually super easy! And it will taste so much better than anything you could buy in the shop.

If you get on well with this, you may even want to try making vegan naan!

Roti is a flatbread that is popular in India. It’s traditionally made with stoneground, wholewheat flour (called atta), which gives it a deep and savoury flavour.

We love vegan roti on the side of a curry, it’s perfect for mopping up sauce or even biryani gravy. Or, you could forgo the curry altogether and have your roti with your favourite side dish. It goes really well with mushroom bhaji and aubergine bhaji.

You might be surprised at how easy it is to make vegan roti! They’re also pretty quick to make, just be sure to leave enough time to prove the dough.

Are you wondering what to serve your vegan roti with? Or perhaps you have questions about the recipe? Read on to find out more...

Depending on which type of flour you’re using, you may need a little more water than we’ve suggested.

To get the perfect vegan roti you’re looking for the dough to be smooth and elastic, but not too wet.

If the dough is cracked and dry this indicates that you need to add a little more water. Start with ¾ cup of water, and then add a bit more, a tiny bit at a time, if you need to. Remember not to add too much at a time, you can always add more but you can’t take it away!

If you’ve baked bread or made naan before, you may know that the conditions in your kitchen can affect the dough. The temperature and humidity will impact the end result, and so will the type of flour you use.

Generally, if your kitchen is warm then you can probably reduce the proving time a little. If it’s humid, then you may not need to add as much water. You may also find that what works with one type of flour doesn’t work so well as with another. Don’t be afraid to trust your intuition and your vegan roti will be great!

The secret to good vegan roti is a really hot pan. Make sure that you heat the pan for a good few minutes without anything in it before getting started. Once the pan is radiating heat, you’re ready to get started.

The first side of vegan roti always takes longer than the second side. Bear this in mind when you’re getting ready to flip it over.

Not every roti is made equally

Especially the first one! Just like when you’re making pancakes, with vegan roti it’s pretty common for the first one to be less-than-perfect. Sometimes the pan might not be the right temperature, or the timings might not be right. Sometimes it’s just ‘one of those things’ (without sounding too cliche!)

You’ll get the hang of it though, so get the first slightly weird one out of the way and crack on. Don’t let it knock your confidence.

Brush your vegan roti with a little vegan butter before putting it in the pan. This does add some calories, but it makes it taste so good! It will add a salty edge that really takes your roti to the next level. It’s so worth it. And everything is fine in moderation, right?

Usually, yes. It’s not made with yoghurt like naan is, which makes it a good choice for vegans when you’re out and about. In traditional Indian cooking, the roti is often brushed with ghee. It’s worth checking this with restaurant staff if you’re ordering it, just in case.

Could these roti be gluten-free?

They can be if you use a gluten-free wholemeal flour. Traditionally wholemeal is used when making roti.

Do I have to use butter for brushing?

No, you don’t have to use butter to brush the roti. It definitely makes a more delicious, salty, finishing touch though. We’ve made them without butter in the past and we’ve found that they were a little bit bland. Almost like eating a piece of toast without any topping - not awful but also not great!

Can they be frozen?

Yes, vegan roti freeze really well! They will keep in the freezer for up to three months. Reheat in the oven from frozen. As they’re thin, they only need around 5-6 minutes on gas mark 5 / 190°C.

🍛 What to serve it with

Vegan roti is absolutely perfect with any dish that has a good amount of sauce that you can mop up with the bread!

We love Vegetable Tikka Masala with roti because the sauce is so thick and creamy, but with a lovely spice! We make our Tikka Masala with cauliflower, in our opinion one of the most underrated vegetables. Marinating it in spices makes it extra tasty.

Vegetable Pasanda is a great choice when you fancy a curry that won’t blow your head off. The sauce is made with a combination of vegan yoghurt and ground almonds, making it nice and thick.

Mushrooms are a great protein source for curry because they have a ‘meaty’ texture and a delicious flavour. Try your vegan roti dunked in this Creamy Mushroom Korma, we think you’ll love it!

If you like our vegan roti, check out some more of our Indian inspired recipes:

And if you’re looking for even more Indian recipes, get inspiration in our huge Vegan Indian Recipes guide. 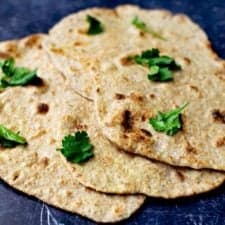