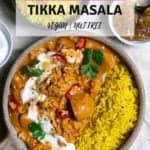 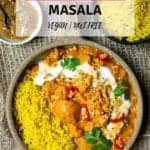 Vegetable Tikka Masala is a perfectly creamy curry with a spiced sauce featuring warming flavours, along with roasted and marinaded cauliflower! When combined, they make the most perfect curry that’s similar to vegan butter chicken. And it only takes 30 minutes to make!

Check out the recipe card at the bottom of this article for exact measurements and instructions on how to make vegetable tikka masala.

This is a step-by-step overview with photos of this recipe. The full recipe, along with measurements and detailed instructions can be found in the recipe card at the bottom of the page.

1. To make this spicy and delicious vegetable tikka masala the first thing you will need to do is marinate the cauliflower. Chuck all of the marinade ingredients into a bowl, and mix them until they are combined. Add the cauliflower to the bowl and coat with the marinade. Ensure that the cauliflower is well coated so that it soaks up the flavour.

2. Line a baking tray with parchment paper, and then lay out the pieces of cauliflower on it. Try to spread them out evenly. Pop them in the oven on gas mark 5/190°C for 15 minutes. You’ll need to turn them over once about half way through. This will ensure that they cook evenly.

3. While the cauliflower is cooking, heat a dash of oil in a pan. We’d recommend a high temperature oil like groundnut or rapeseed. Add the cumin seeds and fry until they start to sputter.

4. Once the cumin seeds are sputtering, add the onion and potatoes to the pan and sauté for around 10 minutes.

5. Now add the garlic, ginger and chillies and fry them for another minute. Sprinkle over all of the dry spices, and stir the mixture well so that everything is coated.

6. Mix in the tomato purée.

7. Pour in the vegan cream and stir well so that everything is combined.

8. Next, pour in the water and bring to the boil. Turn down to a medium heat and simmer for 15 minutes.

9. Add in the peas and heat them through.

10. By this point the cauliflower should be ready. Remove from the oven, and pop the pieces into the curry, and stir well. Some of the marinade on the cauliflower will naturally fall off into the sauce, making it even tastier. Season with salt to your liking, and then serve and enjoy!

This vegetable tikka masala contains marinated, roasted cauliflower, served up in a rich and creamy tomato based sauce. It has a medium-spicy, and creamy flavour and feels indulgent to eat.

What’s the difference between curry and tikka masala?

Masala sauce is more complex than a lot of other curry sauces, and it’s made up of a lot of different flavours. It’s also a lot creamier than other curry sauces. The tikka element of a tikka masala is the main ingredient that is baked in a marinade to make it extra delicious. Traditionally the main ingredient would have been chicken or meat, but in this vegan tikka masala we have used cauliflower which tastes even better.

Absolutely! Vegan tikka masala is a great dish to keep in the freezer ready for those days when you just can’t be bothered to cook. We’d recommend separating it into portions before freezing, as this will mean you can just defrost what you need, rather than having to deal with an enormous block of frozen food. It will keep well in the freezer for up to three months.

Can I use other veg?

Yes, definitely. We think the combination that we’ve listed for our veggie tikka masala here works really well, but there are loads of other variations that you could try. Carrot, sweet potato and aubergine in particular would all work really well in this curry, but experiment with local, seasonal veg. That will reduce your carbon footprint too!

Tikka masala isnt' as spicy as say, a madras, but it's a lot spicier than a korma! It has a spicy yet creamy sauce. While it’s not the spiciest curry ever, it does have a medium level of heat. However, when cooking you can tailor the spice level to your taste.

As with any curry, vegan tikka masala is best served with all of the side dishes you can lay your hands on!

If you're interested in making even more vegan Indian food, then head to our article: 60+ Ultimate Vegan Indian Dishes. There's lots of inspiration in this list! 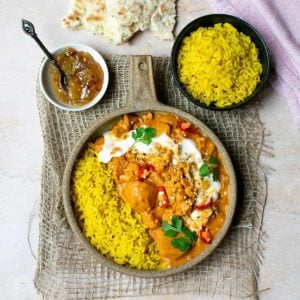